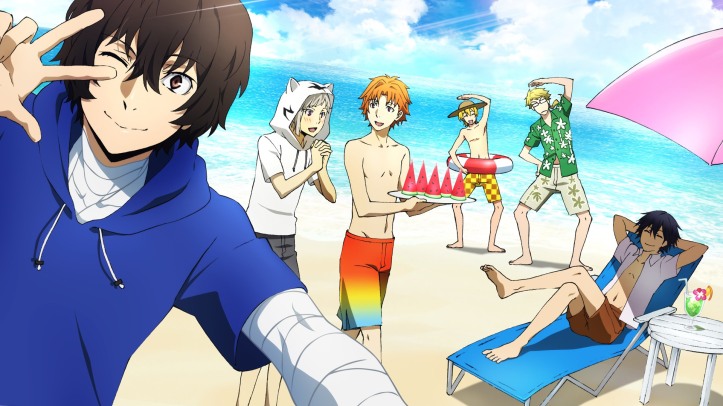 It is hard to believe Spring break is already over! Like seriously, where the heck did the ten days go?

Well I was pretty bummed out about not being able to go to a convention to start off spring break. My friend had to cancel last second due to work obligations which was completely understandable. Instead, I found myself driving to a beach house with the family for the weekend! Their was a Seafood festival going on at the time we went. We decided to go check it out, which turned out the festival was quite nice. Live music, vendors everywhere, and AWESOME food! Hey, it was kind of like a convention if you think about it! XD

We ended up going to a brewery at night which had a neat vibe to it. The table outside had games like giant Jenga, Rock’em Sock’em, Dominoes, and Checkers. We went for the giant Jenga and my sibling ended up taking out a wrong piece resulting in a huge crashing sound. It was pretty funny because everyone sitting outside proceeded to scream “JENGA” followed by a round of applause.

“Are you free Tuesday? Cool we’re going to Disney World!”

On Monday driving back from morning track practice a friend of mine asked me if I still had a day left on my ticket for Disney World. I had really been wanting to go back to Disney so regardless I was probably going to say yes. Luckily, I did have one day left on my ticket. I told him about the day left and he answers me “Cool, We’re going to Disney World”. I was like sure why not!

Despite the Magic Kingdom being a mad house with a ton of people there. (I guess literally everyone on spring break had the same idea as us.) It was one of my favorite trips to Disney. Mainly because of the people I went with. The friend that reached out to me is in our big group of friends, but we don’t talk very often. We know each other and we’re friends, but we don’t see each other very much. I thought of the trip being an awesome opportunity to grow a closer friendship. Not only with my friend, but also his cousin who is in the same group of friends. His cousin is also in engineering so we see each other a little more often since we’re on the same campus. I really enjoyed hanging out with them and I feel a lot closer to them as friends. It was also nice because a lot times with my immediate friends getting to Disney is half the battle on our trips. Many times schedules make it hard to confirm till right before or cancel night of. This trip was more get up and go.

On a side note: I had my first ice cream float in ages. Yes, when I walk through the gates of Magic Kingdom my age drops to like 12 years old real quick. 😀 Also I was wearing my D.VA hoodie and got a lot of complements from people who played Overwatch!

I returned from Disney the day after we left and pretty much went into relaxation mode till St. Patrick’s Day. I played a lot of Nintendo Switch and watched a good amount of anime during the day in-between! Next up was St. Patrick’s Day! I decided to try something different out this year and get out of my comfort zone a bit. Usually for St. Patrick’s Day I would have probably gone to a bar with my close group of friends and just hung out for the night. Instead I decided to hangout with my sister, her fiancé, and their group of friends from a group they attend. It made for putting myself in an environment that I didn’t really know anyone and having to jump out of a comfort zone a bit.

I ended up having a great time. The place we went to had like a block party going on with a ton of people. Not going to lie, I was quite nervous at first. You know when you’re getting introduced to a bunch of new people at the same time? It becomes a little overwhelming because you’re trying to focus on giving everyone the same amount of attention while figuring out the proper things to say. Yea, that was me the first bit of the night. I was able to finally settle in and ended up having a great night. I was also proud of myself that I decided to throw myself out of comfort zone for the night. Sure I definitely have some work to do, but it was fun!

Unfortunately, my last two days of spring vacation were forced to be spent on studies. With two midterms and a project approaching quickly, it was time to get back in tact with reality. I’m happy to say this semester has been going really well. I have a dedicated study group of about 5 of us that are almost in all of our classes. It makes it so much easier to sit down for about 6-7 hours straight and bust out an awesome studying session. I still try to study a small bit alone just to make sure I’m retaining and understanding the material on my own.

Overall, spring break was quite different from what I intended it to be. Despite being different, I really enjoyed my spring break. I was able to jump outside my norm a bit to spend time with people I haven’t hung around a lot with. As far as conventions go, I’m not too bummed out since SuperCon is approaching! Their is a retro-con this weekend but I’m not sure if we’re going to attend. If we do, I’ll let you know!

That’s all for this sketch!