January’s Animated Character of the Month

Welcome to the first Character of the Month selection for 2018!

I’m going to try out something new out on the blog for this year. Last year I had a category named, Characters for the Weeks. Essentially, in a given month that was not a themed month, two characters would be named Characters for the Weeks. I’ve decided to change that category to Character of the Month. It will pretty much be ran the same way. Instead of two characters sharing a non-themed month, only one character will be focused on for the given month. The only other small change is that now these apply to themed months as well. So Animated will have 12 Characters of the Month for 2018! That’s enough explanation, so onto the post!

The first character to be named Character of the Month will be Jeanne D’Arc from the Fate series!

Since I began watching Fate Apocrypha, Jeanne has become not only one of my favorite characters in the series but also in anime in general. I find her anime and heroic spirit adaption backstory both super fascinating. Jeanne D’Arc can seem to be to herself and quiet at first, however she is a very strong willed character. She puts her duties as a Ruler class servant above any personal beliefs. She has no desire for the Holy Grail war, however wishes only that the Greater Grail War be conducted in the correct fashion. Being the Ruler servant, her duty is to see through the Greater Grail War sort of acting like an “O-P-Referee” mediating the war.

What Makes Jeanne a Ruler?

As of the date of this post, there are currently only five known Ruler servants. (I say this date just incase Fate/Extra Last Encore changes this.) Rulers are not your standard servant as they are tasked not to fight Holy Grail Wars, but to preside over them. Unlike other classed servants, Ruler class servants are given command seals to help protect the concept of the Holy Grail War. There is one major requirement to be summoned as a Ruler servant. The servant must have no desire or wish for the Holy Grail. This isn’t a requirement, but most of these servants tend to be saints. Jeanne D’Arc pretty much fits the bill perfectly as a Ruler servant. She has no desire for the grail and her heroic spirit is based off of Saint Joan of Arc. (Both can be called Jeanne or Joan. I chose when describing the anime version to use Jeanne as that what she mostly goes by in Apocrypha. When describing the actual real life saint I’ll be using Joan.) The heroine of France, and  referred to as La Pucelle d’Orleans (The Maid of Orleans). Joan is the patron saint for France, martyrs, soldiers, and Women Accepted for Volunteer Emergency Services (WAVES). She is most known for her role during the Lancastrian Phase of the Hundred Years’ War. She was beatified in April 1909, and canonized as a Roman Catholic Saint in May 1920 under Pope Benedict XV. Joan of Arc was one of the most studied subjects of the Middle Ages and continues to remain a popular figure in films, theater, video games, music, and …well… anime of course! Her feast day is celebrated on May 30th.

Her character in the Fate series is quite an accurate depiction to the real version of her heroic spirit. One of my favorite descriptions of her anime depiction is the following: “To her, every second of prayer is as important as every breath she takes.” I believe that would be an accurate statement to how the actual saint would have carried herself. Another interesting detail depicting the anime adaption of her character is her stance on regret, or lack there of. Both Saint Joan and Ruler Jeanne were put to death for there beliefs. However, going back to not having a wish for the grail, Jeanne has never wished or pursued revenge for her death. She does not believe God had forsaken her in the last moment. She believes God has never forsaken a single person. One of the details that are very much true when comparing the anime adaption and the saint. 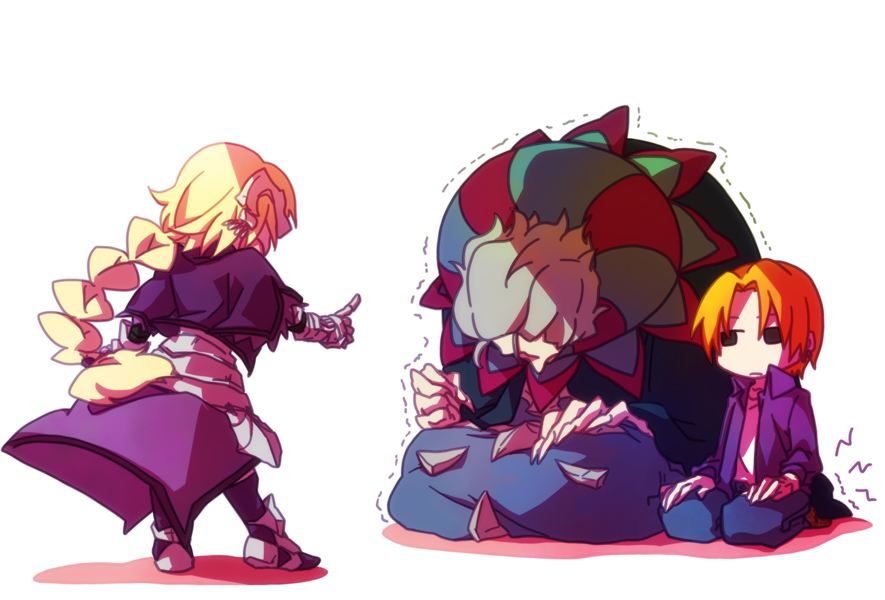 I love when the a Fate servant’s story intertwine with another servant. One of the most notable is Saber and Berserker in Fate/Zero. Another servant relationship in Fate/Zero that people may miss catching if new to the series is the backstory of Ruler and Caster. Although Jeanne does not participate in Fuyuki’s Fourth Holy Grail War (Fate/Zero), she’s mentioned during the events. Specifically by Caster.

Caster is based off the heroic spirit, Gilles de Rais. In real life, Gilles was a leader in the French army, and companion-in-arms of, you guessed it, Joan of Arc. Though being known for his reputation as a leader in the French army, he is most known for later being convicted as a confessed serial killer of children. This is why Caster’s Master in Fate/Zero is depicted the way he is. I’m not going to go into detail because it’s a rough subject to talk about, but if you’ve seen Fate/Zero, you’ll know exactly what I’m talking about.

Gilles viewed Joan as the basis his salvation, and proof the God existed. When Joan is executed as a heretic, Gillies falls into a madness over the loss of Joan. He begins to perform cruel deeds to prove that God is absent from the world.

See all those, what would seem as, random events in Fate/Zero actually have a huge backstory and take on such a deeper meaning.

During Fate/Zero, Caster believes that Saber’s true identity is Joan of Arc. He has no wish for the grail till he meets Saber. He carries out his deeds in the Holy Grail War motivated by the illusion of Saber being Joan of Arc. Saber ultimately ends up using Excalibur to defeat Caster. The golden light emitted by Excalibur’s presence and blast causes Caster to recall memories of serving alongside Joan. Caster realizes his mistakes and regrets his decisions moments before he is destroyed. I originally was going to save Jeanne’s Character Month for May to celebrate her feast month. However, with her character and quote being my motto for 2018, I thought it would be perfect to give her the recognition right off-the-bat. We’ll still celebrate her on her feast day on Animated. 🙂

We’ll be talking more about Fate and Jeanne throughout the rest of the month to continue on the theme! Hope you enjoyed and stay tuned! 🙂